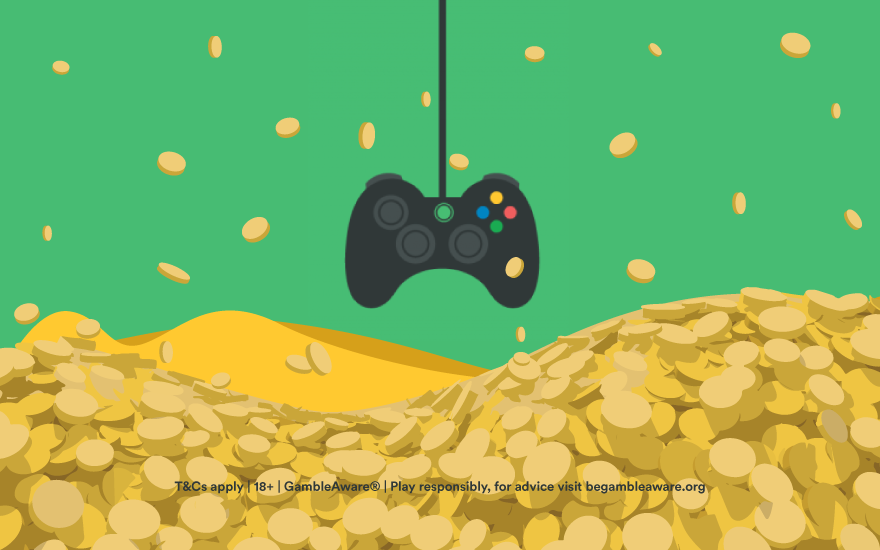 What’s that video game worth now?

Not all treasure is silver and gold

Hello friend. Have you ever heard about the kind of auction sales for collector video games and consoles, thinking you might be sitting on a little fortune with an unopened Super Mario Kart SNES cartridge or a dusty Atari 2600 in the attic?

Time to stop the wondering! Here at Casumo we’re not simply an online casino, we also like to do a fair bit of research. Which is why we decided to take a look at some of the best–and worst–video game investments over the last 35 years, and which possible treasures you may–or may not–have stashed on a dusty ol’ shelf in the garage. Let’s see what them nostalgic collectables are actually worth, shall we?

There’s the kind of one-off video game releases of very rare collectables, like Gamma Attack on the Atari 2600, listed on eBay for a whopping $500,000 (£385,748), and then there’s the “normal” games that have become real collector’s items. But only if they meet with certain special characteristics. Here’s a bunch of those real rarities that are now worth small fortunes:

The current value column is the sold or bid price for the item, and the cost of modern equivalent column is based on a generic recommended retail price (RRP) for games.

As you can see, Air Raid on the Atari 2600 shows the largest percentage increase and highest value – with a 108% return from the original price. Not too shabby indeed!

Random fact: the game is not only unique for its rarity, but also for the cartridge design.

Unlike other Atari cartridges, Air Raid was bright blue and featured a T-shaped handle, which apparently turned it into a real collectable.

Superman on Atari 2600 comes in second, with a 97% increase since its original release. However, ONLY if the logo on the cartridge is yellow instead of red, you’ve got your hands on one of the rarest games ever made. Otherwise it’s not all that super.

According to American news magazine Time, an unboxed version of Super Mario Bros on the Nes fetched $30,100 (£22,902) on eBay back in July, 2017.  Are you wondering why someone would spend that much on one of the most popular, mainstream games of all time? Apparently, it came with a super rare “hang tag thingy” on the back from when video games still hung on pegs in stores. Jeez… that’s one expensive little hang tag.

In fact, unfortunately, most best selling games haven’t quite become uber-collectable as of yet; think Mortal Kombat and Super Mario Cart. Mortal Kombat has currently dropped below $30 (£23) on eBay, a -3% decline since its original purchase date,  and Super Mario Kart has seen a -3% decline in value. So if you have a mint condition, unopened box lying around somewhere, it’s probably best to sit on it for a few more decades. 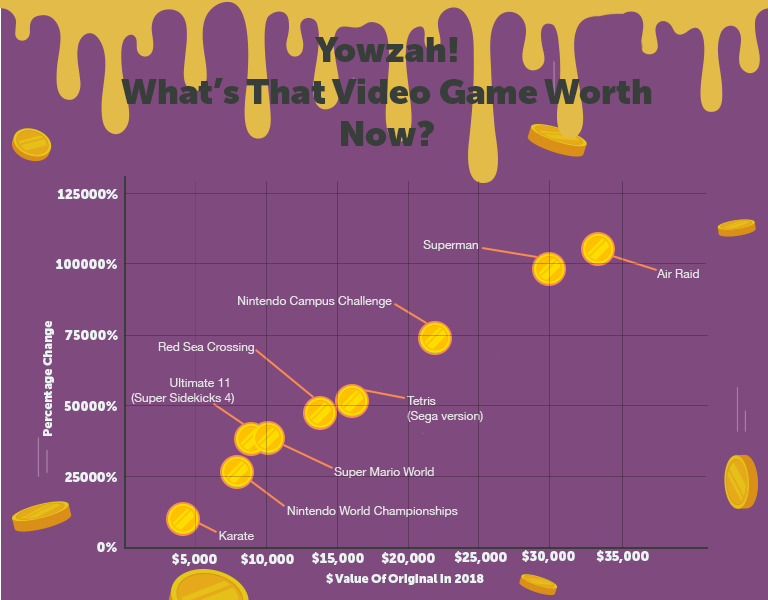 Are you a Beanie Baby Billionaire?

Whilst we are looking at things from our childhood that could potentially make us a pretty penny, we thought we should take a look at the only toy that outwardly presented itself as a long-term investment, the Beanie Baby. You loved them, you didn’t take the tags off and you only spilled a small amount of juice over your Swirly the Snail. So, is he and the rest of your collection FINALLY worth something?

No. Sorry. On average, they sell on eBay for about £1.

But, not ones to leave you feeling blue, we scraped the internet and found a few that might make you some cash. They are incredibly rare, but maybe it’s your lucky day? And just to hammer home our point, we’ve compared them to our most valuable video game. 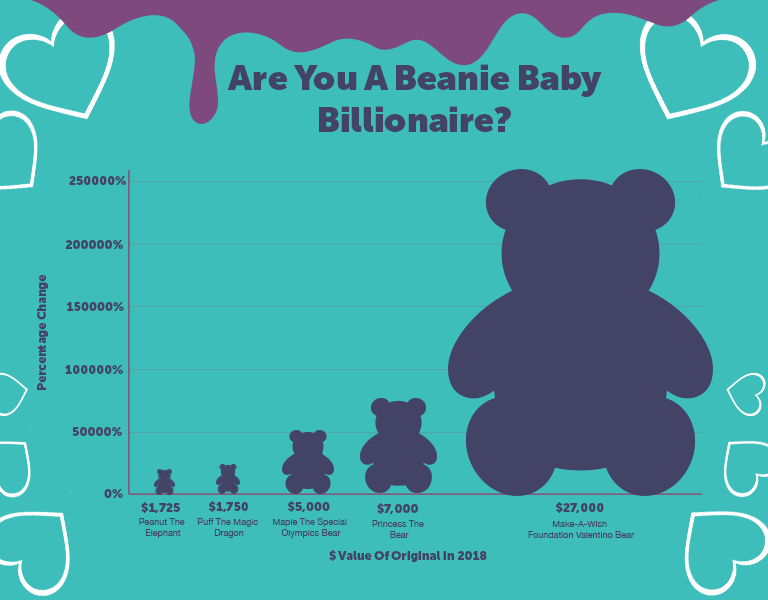 Cash in on your comics?

It seems the geeks are coming out on top when it comes to investing. The only people cashing in more than the gamers are the comic book collectors. Admittedly comics have had a little more time to gain value than our games AND they were cheap to buy in the first place – the average comic cost around 10¢ in the 30’s and 40’s, adjusted for inflation that’s about $1.80 (£1.38), – but even still, they are raking in huge numbers! A copy of Action Comic No.1 recently sold for a heroic £4.29 million – that’s a value increase of 310,869,465%. No game on our list can even come close to this.

Comics that fetch these insane prices are about as rare as kryptonite these days. Usually it’s first editions or first appearances of classic heroes that pull in the big bucks, but old comics, in good condition can still fetch a few hundred pounds if you find the right buyer. We’ve put together a list of the most valuable (if you think you’ve got one of these lying around, get moving) and compared them to Superman for Atari 2600 – it turns out that the man of steel is worth more cash in comic book form. 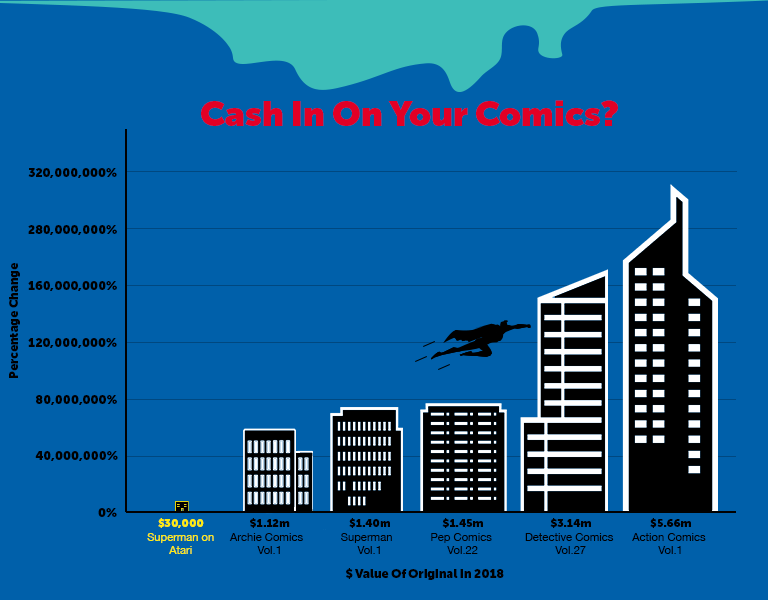 Are ANY of your childhood toys worth anything?

Ok, so you weren’t into comics and you threw away all of your video games. Is there anything still in the loft in a box from your childhood that might earn you some spending money?

But the real magic item, the holy grail of attic finds, is a Magic the Gathering: Lotus alpha-deck card. We don’t know what it is either, but should you come across one, pop it on eBay – you could be in for a £20,618 payday. Magic indeed! 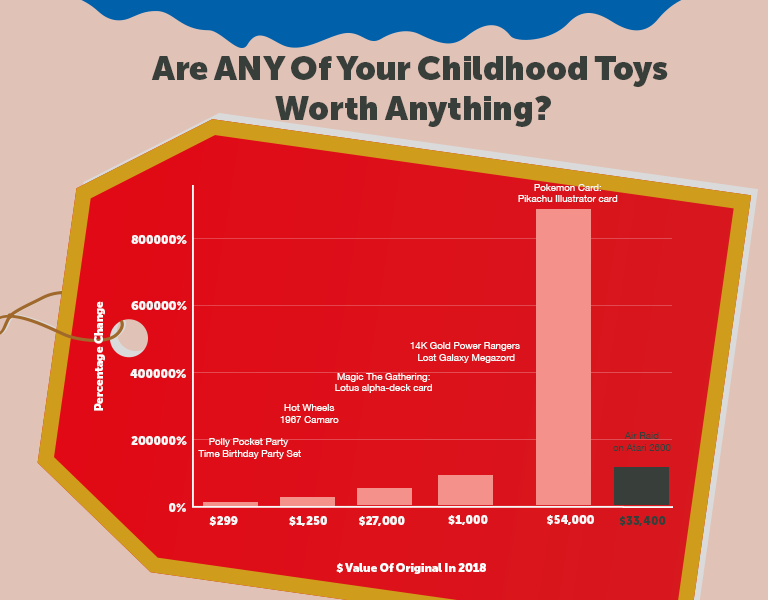 The value of your old records could be music to your ears.

It turns out music lovers could be in for a big score. Maybe you didn’t spend the 80’s buying up video games, maybe instead, you spent your money on music – specifically vinyl. But who invested best, the music lovers or the gamers? Well, it seems like in this case, the vinylheads are the winners.

For example, a copy of the 1980 album Double Fantasy by John Lennon and Yoko Ono – which originally retailed for $54 – is now worth $150,000! That’s a pretty sweet 275888.96% return on investment and value increase that is more than twice as high as Air Raid, the most valuable game on our list.

And that’s not even the best example. In 2008, Wu-Tang Clan released Once Upon A Time in Shaolin on vinyl for $17. Just 10 years later, it’s worth $2,000,000. Wait what!? Well there’s a catch, they only ever released one copy. Like some of the games on our list, this is a case of scarcity breeding value. 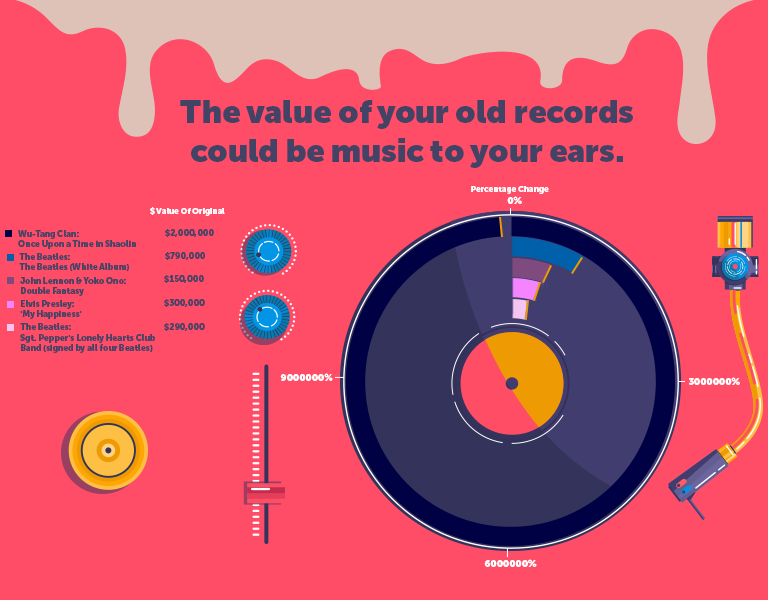 Superman vs. The London Housing Market 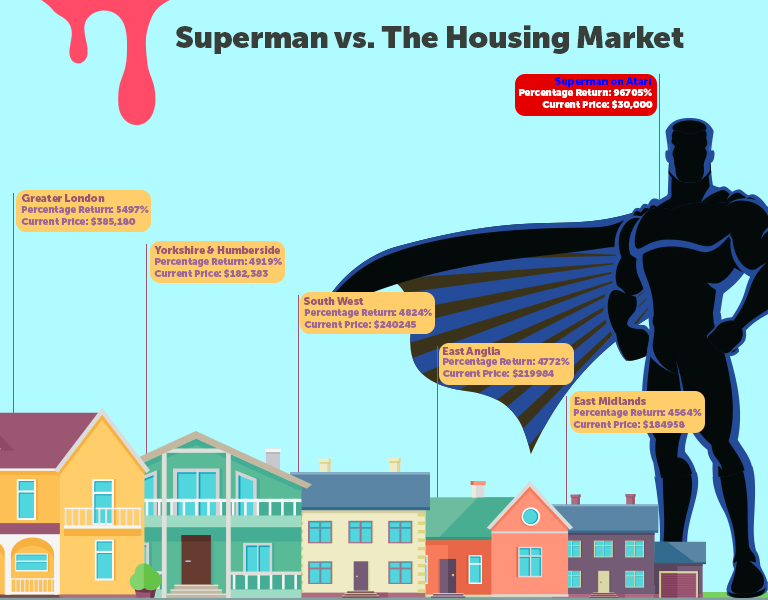 If you didn’t spent the 90’s hoarding video games, don’t feel bad. No one could have predicted this value boom. Though it might still be worth having a dig around in the ol’ basement, you never know what treasures you’ll find.

Is there a goldmine in the garage?

Maybe you missed the mark with houses, but could you score big with what’s in the garage? Ok, this one is a long shot. The chances are, if you’ve got a classic car that’s worth something, you probably know about it and unfortunately, we’re not here to tell you that your 1998 plate Peugeot 206 is now a classic and worth thousands and thousands of pounds. But for the people who do have a classic car in the garage, or just petrol heads in general, it’s interesting to see how these investments held up against the games on our list.

In general, it seems classic cars do appreciate in value, many even better than the most expensive games on our list. The best example we found was a 1939 Alfa Romeo 8C 2900B Lungo Spider which originally sold for just £1000 and is now worth just over £15,000,000. That’s a 1979900% value increase. That’ll rev your engines!

As an interesting comparison, the only car game on our list – Mario Cart – depreciated in value by over three percent. It turns out real cars are a better investment. 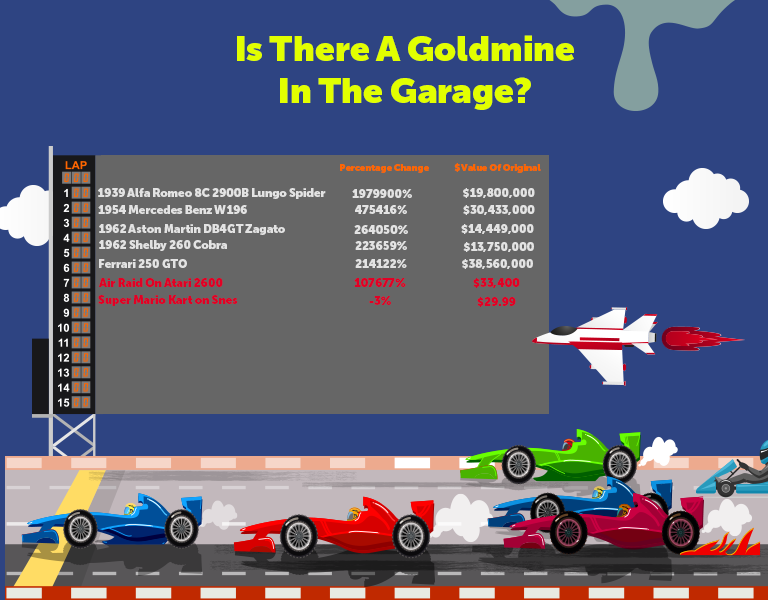 So far, we’ve talked about the items on our list as though they were investments, but a lot of them never really were. They’re things we bought for fun, simply because we wanted them. But how do our games hold up against more traditional investments, like gold, oil, stocks etc?

All that glitters is not Golden Eye for N64

2012 Was a golden year, with crazy value increases, and whilst it has levelled out a bit since then, the value of gold has seen an overall increase over the past 45 years according to industry trackers Spot Gold.

In 1990, the average price per gram of gold was around $13 (about £10). Today, it sits at $37 (£29) per gram – a 185% value increase. So, if in the 90’s you invested all your disposable income into gold coins, or lived out a pirate fantasy and buried a treasure chest filled with gold bars in your backyard, then today you must be feeling pretty pleased with yourself.

But even real shiny gold couldn’t beat video games in terms of return on investment. A copy of Golden Eye for N64, released in 1997, has increased 1,836% in value in just 21 years-that’s almost 10 times more than gold!

It’s certainly interesting to see that the 16th most valuable substance in the world hasn’t increased in value anywhere near that of the top vintage games. 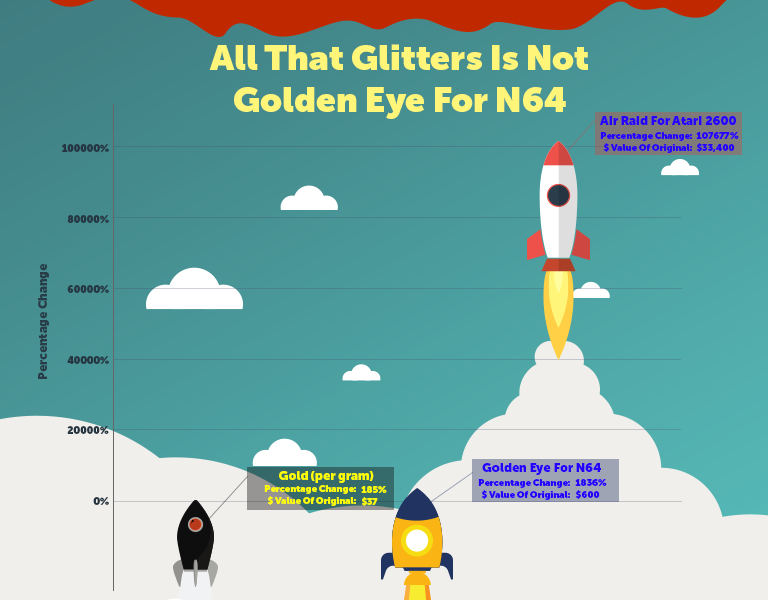 How much stock should you put in stocks?

The stock market might be the first thing that comes to mind when we think about investments. We’ve all heard of people who have made their millions in stock and shares. But, we’ve also heard about people who’ve lost millions. So are video games a more stable investment?

We looked at how the FTSE, Nasdaq and S&P 500 have risen and fallen since 1984 and compared that to our list of games with some fascinating results.

But when we compare it to our list of games, they far outstripped all three of the major markets when it came to value increase. The average value increase of the 15 games on our list is 32,121%. Stockbrokers dream of numbers that big! 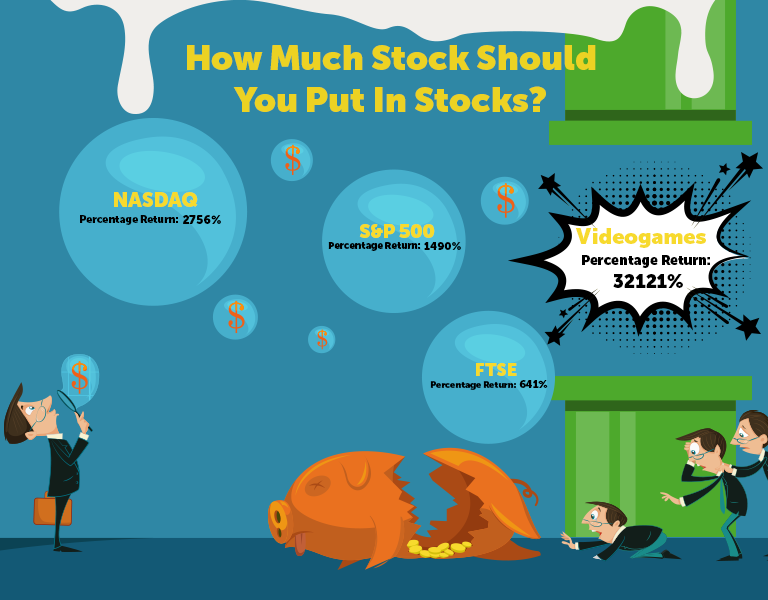 What about Government investment bonds?

Maybe your good old gran opened one of these for you when you were a kid and every now and then you’d get a random £20 in the post with a note saying your bonds had paid out. Well as it turns out, unlike that copy of Tetris you wanted so badly for your Sega, the percentage yields on investment bonds have drastically dropped since the 70’s and 80’s. And it’s happened worldwide. In the UK, the percentage yield on bonds had a staggering 84% and it’s even worse in Japan and Germany where yields are now 98% and 93% lower respectively. You’d have had to have invested a huge initial sum to see anything like the $16,000 that a copy of Tetris would be worth now. 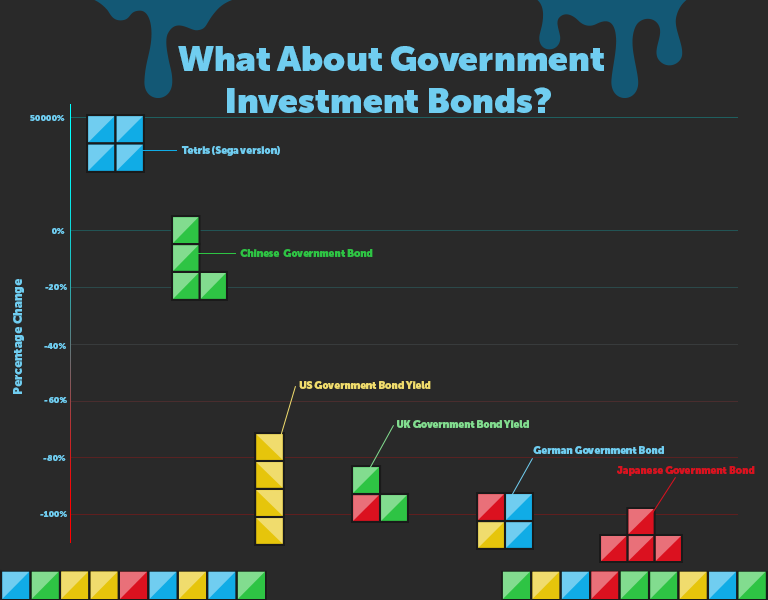 By this point, you’re probably questioning at lot of things. For example, why are oil magnets billionaires  and not the 30 year olds cashing in on their vintage game collections?

But the thing is, they were never really an investment. No one who bought those games could have predicted that they would be sitting on potential gold mines. Today we know a little about what makes a game worth big bucks, and we can apply that to what we buy now. Limited editions and first releases might all be worth something someday, provided there are people interested to buy them. And even though the value of oil fluctuates, there will continue to be a constant demand for it. The reason why there aren’t any video game collector billionaires is simply because no one was buying up games with the actual intention of getting rich. 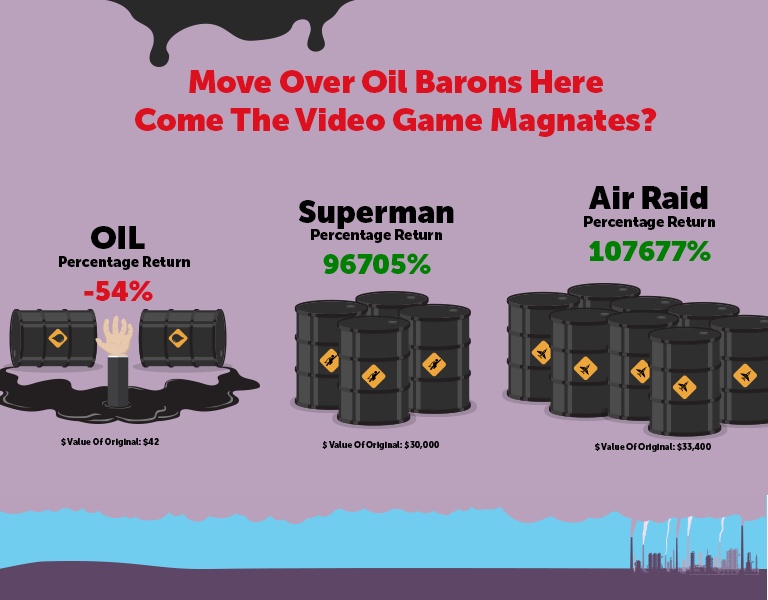 Cameo Inflation: Who’s earning the most since 2021?
Casumo LikesNews4 Weeks ago
9 in 10 Brits think the Queen is wrong for her love of Twinings tea
Casumo LikesNews8 Weeks ago
Horses with ‘human inspired’ names most likely to win Grand National
Casumo LikesHorseracingNews9 Weeks ago
Casino offer