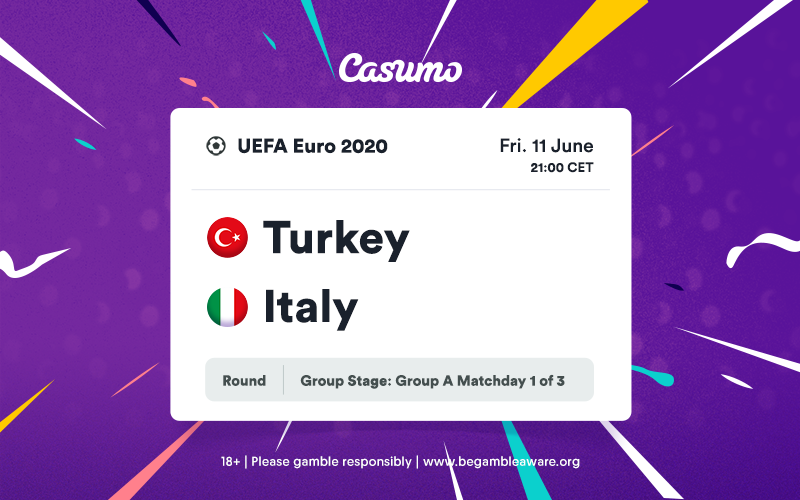 Italy will kick off Euro 2020 on Friday evening when they host Turkey at the Stadio Olimpico in Group A. After all the anticipation and excitement, the talking will finally stop. The Azzurri will be desperate to get their campaign off to a flyer, but standing in their way will be Turkey. Can Roberto Mancini and his charges pick up three points? Read more to find out.

Rarely does a new manager wave his wand, and things magically happen. But sometimes there is a lucky bounce here or a great kick there, and a team strings together a sequence of wins and right now the belief in the Italy squad is palpable. With a perfect blend of youth and experience, Roberto Mancini’s men qualified for Euro 2020 with three games to spare. They also haven’t lost an international game since he took charge in 2018 after replacing Gian Piero Ventura.

Last week, the Italians were rampant as they fine-tuned their preparations for Euro 2020 with an emphatic 4-0 victory over the Czech Republic in an international friendly. Nicolo Barella got on the scoresheet, and he is likely to be instrumental against Turkey, as is Ciro Immobile. At Lazio, Immobile averaged 25 goals per season over the past five Serie A campaigns. However, he has failed to light it up for his country, mustering 12 goals from the 45 caps he has picked up.

Group A also contains Wales, and following their exploits five years ago when they surged to the semi-finals, Italy will be aware of the threat they pose, and they can’t afford to fluff their lines in their opening group game. Currently, Italy are trading at a short price of 11/20 to clinch three points against Turkey.

Will Turkey get stage fright?

With the eyes of the footballing fraternity watching events unfold in Rome, will Turkey hold it together in the Eternal City or will they get stage fright and collapse? In qualifying, Turkey looked strong as they notched up seven wins from 10 games, and Cenk Tosun was their top scorer with five goals.

Of course, facing the Italians on their home turf is another matter altogether. Zeki Celik will be one to watch, as the marauding right-back impressed at Lille last term, and he has found himself attracting interest from a swathe of Premier League suitors, including Manchester United.

Turkey has a decent track record of performing well at major tournaments, including the World Cup 2002 where Senol Gunes guided them to third place before he reprised his role in 2019. Against the Italians, Turkey can’t afford to sit back, as Italy have the players to pick them off.

Five years ago, Turkey crashed out in the group stages, but they will be hoping to extend their stay a little longer this time round. Intriguingly, you can get odds of 13/10 for there to be more than 2.5 goals between Turkey and Italy.

To get things underway at Euro 2020, Turkey v Italy has the potential to be a pulsating encounter. Italy, who previously won the tournament in 1968, have been close to glory a couple of times in recent years including when they were finalists in 2000 and 2012. A strong start is imperative for them to have the tournament they’re hoping for

Mancini has his team well trained, and he won’t allow complacency to kick in. Roared on by a predominantly partisan crowd, Italy will feed off this, and they could well end up sticking a few past Turkey. Italy haven’t been talked up much as Euro 2020 contenders, but against Turkey, they can lay an early marker, and they won’t want to miss the opportunity to start the tournament strong.