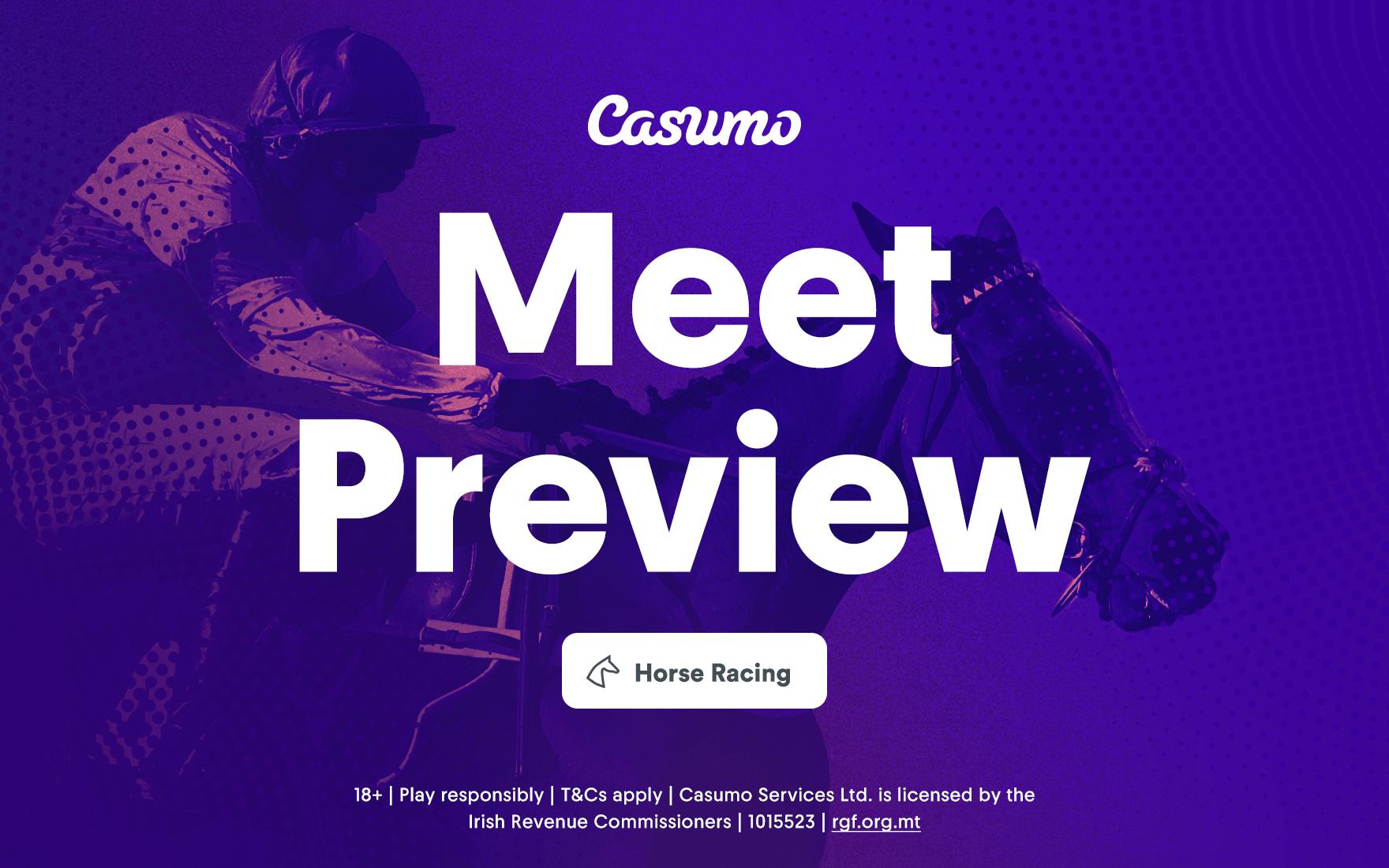 Horse racing fans will be getting excited with Royal Ascot on the horizon next midweek – a meeting we’ll be covering too – but before that we’ve more LIVE ITV action this Saturday as the cameras head to Sandown, York and Chester.

We’ve eight races spread across the three venues and here at Casumo we’re on hand to take you through each LIVE race with key trends and stats, plus our verdicts.

CASUMO VERDICT: With seven of the last 10 winners coming between stalls 5 and 9, this is good news for NELSON GAY, WARRIOR BRAVE, DENSE STAR, SILENT QUEEN and STEEL BULL. Of that bunch, WARRIOR BRAVE and NELSON GAY standout. The former has won three of his last five, including last time out at Goodwood. The Mick Appleby yard have given him a break since and despite being up 4lbs more here looks the sort to have more to come. Nelson Gay has a bit to prove after being beaten by Warrior Brave at odds-on at Goodwood two runs ago, while last time at Leicester he wasn’t the best away. Dropped 4lbs here and Ryan Moore booked to ride are the pluses, while he’s also a proven course and distance winner here at Sandown. Of the rest, First Edition is another CD winner in the past here and can go well, while Atalis Bay and the in-form Irish raider – Queens Carriage – who heads here on a four-timer are others that can make their presence felt.

CASUMO VERDICT: Nine runners head to post here and with no last-time out winners in the field, then they all have a bit to prove. King’s Knight will be popular and the move up to a mile looks a good move, but after winning at Lingfield three runs back hasn’t quite kicked on off his new mark. I wonder if he’s in the handicapper’s grip. Buxted Too and Dogged should be noted in the betting, while the Mick Channon runner – Trais Fluors was well-backed last time out despite only finishing 4th of 6. However, the interesting one is the Crisford entry – LATEST GENERATION. He’s only had four career runs (1 win) so should have more in the locker. He didn’t stay the 1m2f trip last time at Newbury, but prior to that was though good enough to run in the G3 Autumn Stakes at HQ, where he was a fair 7th to the useful One Ruler. Into a handicap here and back to a mile looks ideal. At a bigger price, CD winner DON’T TELL CLAIRE (e/w), is another to note. She will be fitter for her return run at Kempton and the step back up to a mile (from 7f) will also suit.

KEY CASUMO TREND: 6 of the last 8 winners were aged 4 years-old.

CASUMO VERDICT: A female amateur riders’ race here so jockey bookings are always key. Civil Law is the only recent winner in the field, but is up 10lbs for it’s easy Newcastle win last time out and this looks more competitive too. The experienced Serena Brotherton, who won this race in 2014, is a plus for the Ian Williams-trained Byron Flyer, while Gina Andrews catches the eye riding the Philip Kirby-trained Carlos Felix. However, this is a race the Tim Easterby camp like to target – they’ve won the prize 4 times in the last 17 runnings, so their SAMEEM is one to have on side, while the 2019 winner – ARCTIC FOX – can go well too. The former will be fitter for a recent fifth at Ripon and should be more at home upped to this trip – Emily Easterby rides and she won this race in 2016. Arctic Fox is another that will be much sharper for a recent run, when fifth at Ayr last month. He’s 2lbs lower here and is also rated 7lbs lower than when successful in this contest a few years ago.

KEY CASUMO TREND: Arctic Fox won this race in 2019 when it was last run.

CASUMO VERDICT: Eleven runners heading to post here and with the bulk having a bit to answer, the safest call looks to be the Pam Sly-trained DAZZLING DAN. This 5 year-old has the best recent form on offer after a win at Yarmouth and a close third at Newmarket last time out. He’s got a nice draw in 9 (2 of the last 5 winners came from stall 9) and acts well on this quicker surface. Course winners Golden Apollo, Broken Spear and Troubador will have no track issues, but look to need step forwards based on recent runs. Gifted Ruler ended last season with a close second at Newmarket and has been gelded over the winter – he’s got the form to go well if tuned up for this return from almost a year off. Baashir should be more at home back on the grass too, but the other of interest is MANIGORDO (e/w). This Tim Easterby runner stayed on well to take third over 6f last time at Hamilton to suggest the step up to 7f is a good move here. He’s dropped a pound too and having been rated as high as 98 last year doesn’t look too badly treated off a mark of 87.

KEY CASUMO TREND: 2 of the last 5 winners came from stall 9.

CASUMO VERDICT: A shame there are only four runners here for this Listed race, but the official ratings suggest here won’t be a lot between the quartet. The Andrew Balding runner – Ranch Hand – is the top-rated in the field and has run solid races in two G3 contests recently so this drop back to Listed company will help. He does, however, have to give away 3lbs to Red Version and Roberto Escobar and 8lbs to Makawee. Those last three mentioned are all proven course winners here too, but being a mare the 6 year-old MAKAWEE does get a handy allowance from the others. She’s the joint second rated in the field too and has run two decent races in defeat this season, including last time in a Group Three at York – Jim Crowley rides.  Roberto Escobar is the unexposed runner in the race so could have more to come, while Red Verdon has a bit to prove at the moment after some average efforts, but the Frankie factor is still sure to mean he’ll have some supporters.

CASUMO VERDICT: A tricky and competitive 17-runner sprint to end the live ITV coverage at York, but with 8 of the last 11 winners coming from a single-figure draw, then this looks a good place to start – FIGHTER PILOT, DARK SHIFT, FIRST FOLIO, EY UP IT’S MAGGIE, BLIND BEGGAR, BLACKROD, SHOWALONG, AIKIDO and SEVEN BROTHERS are all draw low in single-figures. Of that bunch, the Tim Easterby runner – SHOWALONG (e/w) – catches the eye with the yard having won 3 of the last 7 runnings. This 3 year-old was also a nice winner at Chester last time out so heads here in winning form. Yes, a 7lb hike for that looks harsh, but he’s ow won three of his six starts and looks the sort that can have more to come. Of those drawn higher, Skyrunner and Jadwal have been running well of late to warrant consideration. Dark Shift and Aikido both have decent low draws and are unexposed sorts that come here in good form too – both winning well last time out. But it was hard to not be taken by the 9-length win of BLIND BEGGAR (e/w) at Catterick last time out. Yes, that came on heavy ground so today’s conditions will be a lot different, but he’s run well on good ground in the past to suggest it will be okay. He’s got a nice draw in 5 and after that last win doesn’t look badly-treated back into a handicap of a mark of 85 – Paul Hanagan rides.

KEY CASUMO TREND: 8 of the last 11 winners came from a single-figure draw

CASUMO VERDICT: Only three previous runnings to go by here so the past trends are thin on the ground. Havagomecca, who has draw 1 here, was a nice winner at Haydock last time out but that came on soft ground and is up 7lbs for that too, plus in a higher grade. REBEL AT DAWN is the other recent winner in the field and despite being up 4lbs looks worth sticking with. This Karl Burke runner looked to have a bit more in-hand than the one length winning margin last time at Nottingham and also showed that day he can win with a big weight (9st 7lbs). Draw three looks ideal and another big run looks on the cards with Richard Kingscote, who rides Chester well, in the saddle. Virginia Plane and Eye Of Heaven are interesting too, but with an 18% record with his 3 year-olds at the track the danger can come from the Tim Easterby runner – LOST MY SOCK. He ran on well to be second at Carlisle last time but the winner has since won again to frank the form, while with just 8st 5lbs in weight will have a featherweight to carry – the first-time tongue tie is also on this time.

KEY CASUMO TREND: Trainer Tim Easterby has an 18% strike-rate at the track with his 3 year-olds.

CASUMO VERDICT: Another race with just a handful of past renewals. Just seven runners too, but with three of those from the Mark Johnston yard, they are clearly meaning business here. Glen Again, Love Is Golden and Military Two Step are the three Johnston entries and a case can be made for them all, especially Love Is Golden, who is a proven course and distance winner here at Chester. Classic Lord won well at Haydock last time out and had Oman back in third that day, but that came on heavy ground so that form may not replicate here, especially with a 7lb weight pull in favour of Oman this time. The two of interest though are SIDE SHOT and MAN OF RIDDLES. The first-named also ran in that Classic Lord race last time (4th) and despite being well beaten the horse lost a shoe in the race so had a decent excuse. Prior to that he’s won well at Doncaster on quicker ground so it wouldn’t be a shock to see him bounce back. Man Of Riddles hails from the David Simcock yard, who won this race when it was last run in 2019. This 3 year-old colt has only had two career runs so should have more to come and was highly-tried in a Listed race at Goodwood last time out on much softer ground. Into a handicap for the first time will help as will be the return to a better surface.

KEY CASUMO TREND: Trainer David Simcock won this race when it was last run in 2019