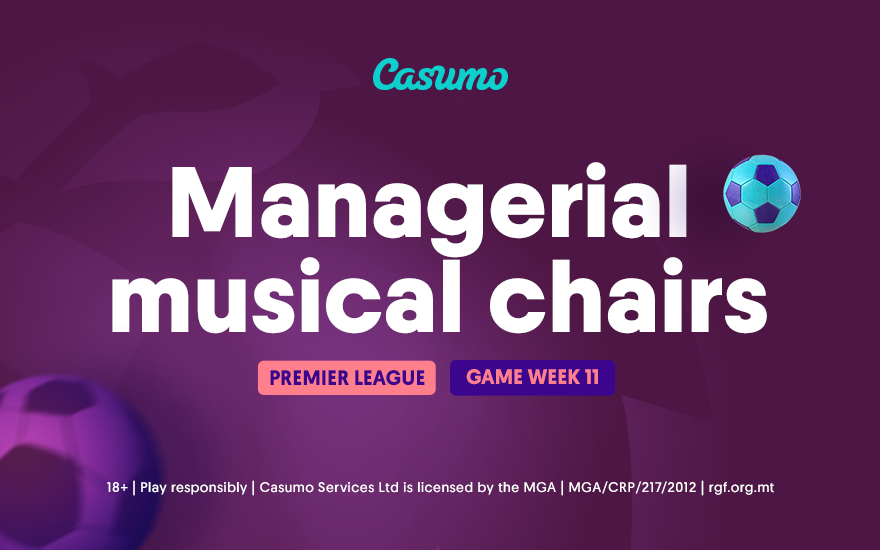 We’re only 11 games into the Premier League season and we’ve seen a flurry of managerial changes in the top flight. No less than five of the 20 teams have already changed managers, with three changes coming around the latest international break.

Spurs and Watford were the first clubs to make changes this season, and both cases were not surprising. Watford change managers more than a kid changes his running shoes, while Nuno at Spurs always felt like a misfit. Antonio Conte took the reins at Tottenham, while fan favourite Claudio Ranieri took charge of Watford.

Steve Bruce has been facing the sack since day 1 at Newcastle United, and following their own take over, they opted for a clear out. Eddie Howe moves up north, in a surprising shift. Eddie Howe was brilliant at Bournemouth, guiding them to promotion from the Championship and ensuring they had stayed up for a couple of seasons too. This will be a different type of battle at Newcastle as he’s got a war chest of funds to spend given Newcastle United’s new status as the richest club in the world. Many big names will be linked, but Howe needs quick fixes if his charges are set to stay up this season.

January signings are typically hard to come by, and when they are made they need to bed in quickly, especially given the dire situation the Geordies find themselves in. Points are needed, and fast, but Howe’s got a tricky situation on his hands. No doubt many of his side will feel their time in the side is up following the influx of cash, while even his new signings might be short term solutions. Instability will be rife amongst the first team, so keep your eyes on the transfer activity up north.

Newcastle United play Brentord for his first game in charge, and you can get a home win here at 17/10.

From Gers to Villa for Gerrard

Aston Villa parted ways with Dean Smith, who was sacked after a run of five straight defeats. In the summer months, Villa sold Jack Grealish to Manchester City, plundering their creative flow and losing a hatful of goals and assists too. It is a decent squad, but one that lacks balance so new coming manager Steven Gerrard will need to address that immediately.

This is a huge step up for Gerrard, who guided Rangers to their 55th Scottish title last season. His Gers were unbeaten and excellent, however you can never compare the Scottish Premiership to the Premier League. The gulf in class is huge, the competition in England is much stiffer, but his experience in Scotland will count for something. He’s a rookie manager, but one that moulded a Rangers team into invincible champions and that says a lot. Naturally, he knows what this division is all about, and this is an interesting move. Villa are a huge club and we can’t wait for his reign to kick off.

Gerrard’s Villa welcome Brighton first and are priced at 6/4 to win.

The departing Dean Smith didn’t spend too long in the job line, as he immediately plugged the hole at Norwich, who sacked Daniel Farke literally minutes after he guided his side to their first league win of the season. That must have been an awkward conversation given the nature of their first victory. In Smith they have an experienced manager who might keep them up, but should he fail, he knows what it takes to win promotion too. He inherits a united dressing room, a decent playing philosophy but a side which struggles for confidence given the lack of wins in Farke’s two Premier League seasons combined. Norwich have become a yo-yo club, which is frustrating for all involved. In the Championship they became used to winning each week, but weekly defeats in the Premier League quickly erodes confidence.

Southampton head over to Norwich for Smith’s first game. Get the Canaries to win at 27/10 here.

Interestingly, all three new managers will all be given home debuts as they kick off their reigns at their new clubs.

Despite all the changes, yes, Ole Gunnar Solskjaer still kept his job even after Manchester United were mauled by Liverpool and flattened by City. Is he now immune to the sack or are United waiting for the ideal candidate to replace him?

The Red Devils play Watford next and then square up to Chelsea the week after where Chelsea are priced at 3/4 to win.  This just shows you how one sided this affair is predicted to be.