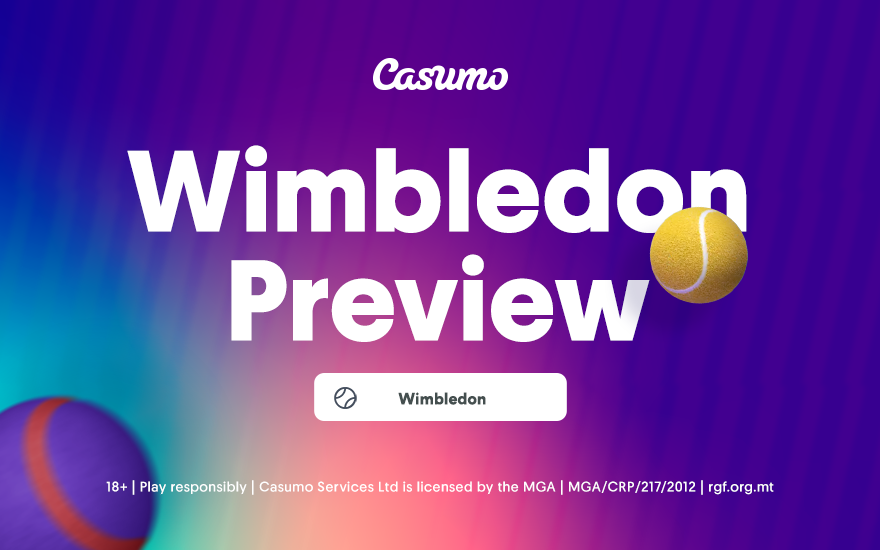 After Wimbledon 2020 was cancelled due to the COVID-19 pandemic, the 2021 edition gets underway on Monday. History could be in the making for Novak Djokovic and Serena Williams. Both are looking to pen more amazing chapters to their illustrious careers. In this preview, we will assess the favourites and contenders in the men’s and women’s draws at SW19.

Djokovic has been irrepressible over the past few months. His French Open triumph last month took his tally to 19 Slams — just one short of Roger Federer and Rafael Nadal. The Serbian — who recently completed the career Slam for the second time in his career — has been an indomitable presence on the hallowed turf at Wimbledon where he has clinched five titles.

Djokovic is one of the finest movers on grass, and it would be folly to rule out a sixth Slam title. Currently, he is trading as the short favourite at 10/11 to defend his title.

Two knee surgeries may have limited Roger Federer’s involvement on the ATP Tour, and he will be contending only his fifth tournament of the campaign. While a second-round exit at the hands of Felix Auger-Aliassime at his cherished Halle may not bode well, Federer won’t read too much into that.

Indeed, Federer, who will be seeded seven, is a nine-times Wimbledon champion, and his grass court credentials are unquestioned. While Djokovic may have something to say about it, Federer, who turns 40 in August, would love to clinch a 10th Wimbledon title, as he won’t be around forever. Currently, you can get a tempting price of 10/1 for him to do so.

Best of the rest

There are some players heading into Wimbledon with good form. In particular, Matteo Berrettini, who lifted the Queen’s title on his first visit by edging out Cameron Norrie in the final. Berrettini, who reached the fourth round at Wimbledon two years ago, will be one of four Italians in the main draw. He is priced at 14/1 to clinch a maiden title.

Meanwhile, Daniil Medvedev, who reached the quarter-finals at the French Open earlier this month, is likely to be seeded second. While the Russian hasn’t always been a natural on grass, the tide could turn for him. Nevertheless, he will face stiff competition from Stefanos Tsitsipas, who is 5/1 to win Wimbledon. The Greek, like Medvedev, has already had a taste of reaching a Slam final.

Will Serena Williams end her wait for Slam No. 24?

The notion of a 24th Slam title has niggled at Williams, and the former world No.1 has had her fair share of disappointment over the years. Equalling Margaret Court’s record still weighs heavily upon her mind. Nevertheless, Williams thrives on grass as the slick surface and short rallies suit her style of play. Currently, she is the second-placed favourite to win Wimbledon at 7/1.

Simona Halep may be the reigning women’s Wimbledon champion, but she has been trying to recover from a calf injury that forced her out of the French Open.

Ash Barty, who is the world No.1, hasn’t played any warm-up events in the lead up to Wimbledon. Nevertheless, she has plenty of weapons on grass and can mix things up with her penetrating sliced backhand. Barty is trading as the 13/2 favourite, and she will be eager to collect a second Slam title.

It was only two years ago that Coco Gauff reached the last 16 at Wimbledon on her tournament debut. A lot has happened since her meteoric rise. But the American teenager, who is 24/1 in the tournament odds, has broken into the world’s top 25. Former three-time Wimbledon champion Chris Evert said: “I think if her serve is on, she could well make the quarters or semi-finals.”