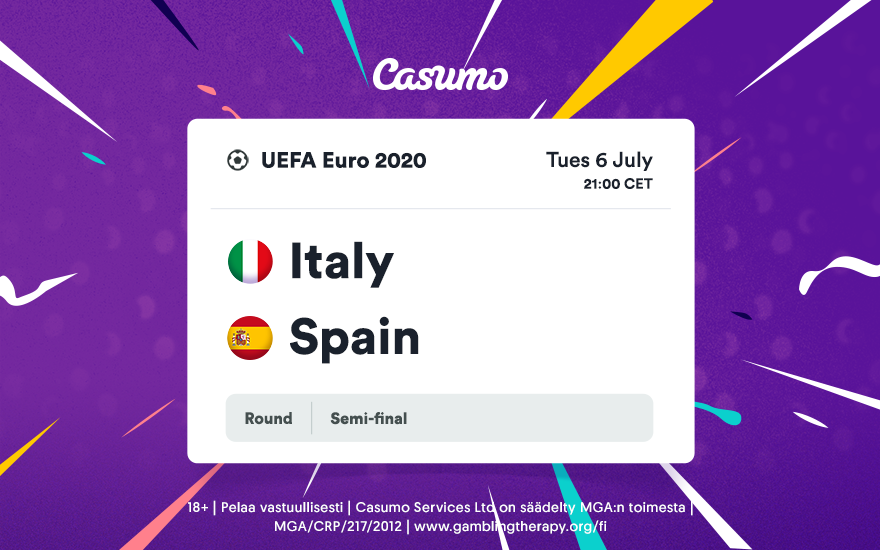 After an enthralling few weeks, the semi-finals of Euro 2020 beckon. Perhaps the more glamorous of the two ties will be Italy v Spain, which will be staged at Wembley. This has been a storied encounter down the years. There is nothing these two European heavyweights don’t already know about each other.

Another fascinating chapter will be woven into this rivalry, and we can’t wait to see how things will unfold. So, sit back, and let us chew the fat heading into these last four meetings.

So far, Spain has been something of an enigma at Euro 2020. Although they registered back-to-back victories against Slovakia and Croatia, scoring five times on each occasion, this has been in stark contrast to their other struggles. Luis Enrique’s men have sometimes flattered to deceive. While they will usually dominate possession, they are a far cry from their absolute glory days. Back then they blitzed teams with their dizzying brand of tiki-taka football.

While Spain will always be mentioned in the Euro 2020 betting tips, they haven’t found things to be plain sailing during the tournament. Inevitably, it takes some teams longer to find their groove. However, things started in an inauspicious fashion when they drew their opening two group games against Sweden and Poland.

One defining feature of Enrique’s side to date has been their inability at times to take their chances. During Euro 2020, Spain has had a tournament-high 39 shots on target. In addition, they have managed to score 12 goals – another tournament high. They have been tested at every turn, and they were taken to a penalty shoot-out by Switzerland in the last eight. However, goalkeeper Unai Simon was the hero as he kept out spot-kicks from Fabian Schar and Manuel Akanji.

Alvaro Morata has come under fire at times during the tournament, but he has appeared more comfortable of late and has slowly started to repay the faith shown in him by Enrique. As things currently stand, Spain are the slight underdogs going into the semi-final against Italy. They are trading at 21/10 to reach the Euro 2020 final.

If we switch our attention to Italy, then we will find a side that has been firing on all cylinders. Roberto Mancini’s men have worn the cloak of invincibility, and they have now won their last 15 European matches, including their qualifiers, which is a European record.

The way they surged through the group stages was impressive, and against Belgium, the Azzurri overwhelmed them with their intricate style of play. They have been sharp, and incisive, and Lorenzo Insigne has carried the greatest attacking threat to date.

While Italy was put to the sword in the final of Euro 2012 against Spain when they lost 4-0, they will have fond memories of their 2-0 Round of 16 victories five years ago. Ultimately, there will be key battles all over the pitch. And how Leonardo Bonucci and Giorgio Chiellini stand up to the likes of Morata and Gerard Moreno, will determine whether Italy will win through to the final on Sunday.

Now unbeaten in 32 matches, Italy’s confidence will be sky-high going into their semi-final clash with Spain. Mancini’s men know how to turn on the style and, currently, they are 29/20 to book their place in the showpiece final.

Who will walk away with the Golden Boot?

Away from the team dynamic of the tournament, the Golden Boot race is intensifying. Cristiano Ronaldo and Patrik Schick lead the way will five goals apiece, but who will defy the Euro 2020 golden boot odds, and carry home the individual accolade? This question will be answered over the coming days.