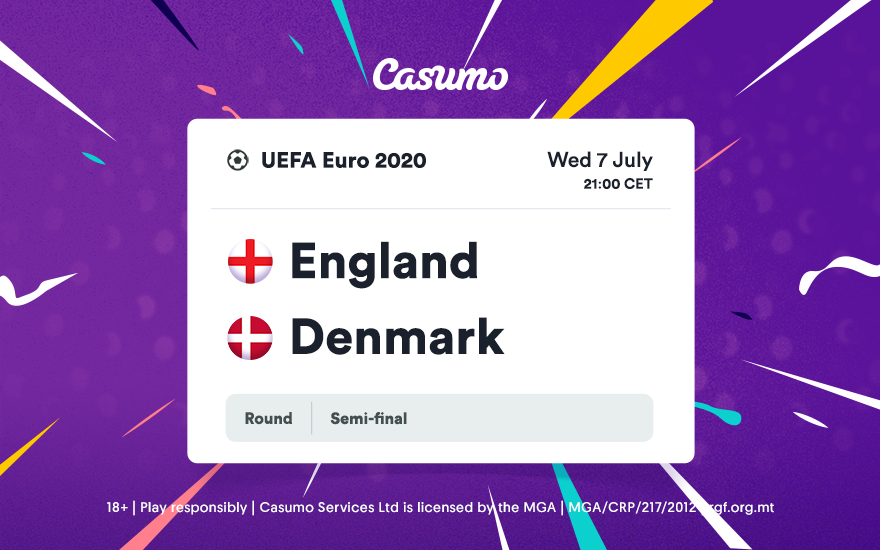 England are back at Wembley on Wednesday evening, as they host Denmark in the second half of the Euro 2020 semi-finals. Denmark has emerged as a surprising contender of the tournament, while England is desperate to end their 55-year drought without an international trophy.

There are so many juicy angles to these last four encounters. We will crunch all the key stats, and give you an indicator of how this game might unfold. With that said, read on to find out more.

Last Saturday, England played with verve and confidence that very few have seen previously. In tournaments of yesteryear, England failed to hit heights, and they lacked belief. But at Euro 2020, they have grown with every game. The emphatic 4-0 victory over Ukraine underpinned everything that was good about England, and the Three Lions were in total control from start to finish.

Gareth Southgate’s charges are still yet to concede a goal at Euro 2020. Their watertight defence has been the bedrock for a team that has been razor-sharp in attack over the past few games. Harry Kane, in particular, has been devastating, and he netted twice in the win over Ukraine. His Euros golden boot odds have plummeted dramatically, as he has three goals to his name in this tournament, and he trails Cristiano Ronaldo, and Patrik Schick by two.

The notion of ‘football coming home’ has reverberated around the country, and at Wembley on Wednesday, it looks set to be another electric atmosphere when Denmark rolls into town. This will be England’s third appearance in the Euros semi-finals, and the semi-final defeat to Croatia at the World Cup three years ago will serve as inspiration to make amends.

Currently, England are at a short 7/10 to get past Denmark, and to win through to the Euro 2020 final on Sunday. England curried favour insofar as the Euro betting tips before the tournament began. They have another chance to prove why they are talked about so highly.

On the other hand, Denmark will be desperate to put a spanner in the works. Throughout the tournament, the Danes have been plucky, and they have taken everybody by surprise. Against the Czech Republic, Denmark set the tone quickly. Thomas Delaney provided the platform for the victory which helped them reach the semi-finals of Euro 2020: the first time they have cemented the last four berth at the Euros since 1992. This is the same year they hoisted the trophy.

Christian Eriksen, who suffered a cardiac arrest on Matchday One, has never been too far away from their thoughts, and the team spirit has swept them into the final four. Against all the odds, the Danes have rallied, and they have shown they have what it takes to compete with the best at Euro 2020.

Denmark boasts a feisty midfield, and they have scored 11 goals at Euro 2020 to date – eclipsing both semi-final teams from 1984 and 1992. While Denmark has only won four of their 21 official games against England, Wembley has been a happy stomping ground for the Danes. On their last visit in October 2020, an Eriksen penalty proved to be the difference between the two sides in a UEFA Nations League encounter.

Kasper Hjulmand’s men have been hard to break down, and they will need to mix things up against England if they are going to have any joy. This means they may have to go long at times which will test the pace of Harry Maguire. But, ultimately, they will have to manage the game if they are going to beat the Three Lions.